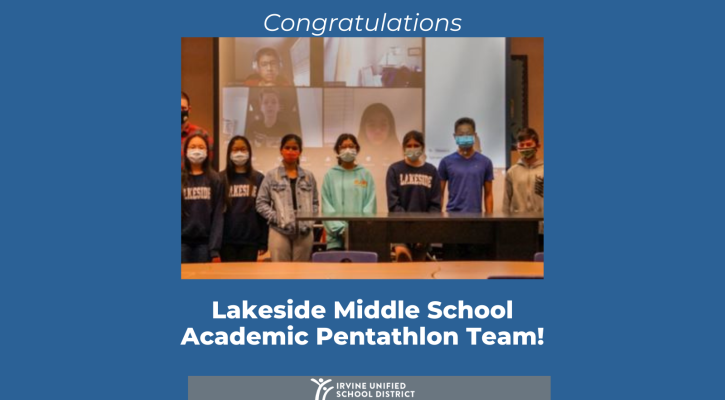 Lakeside Middle School’s seventh-grade academic pentathlon team has earned second place overall at the 2021 United States Academic Pentathlon, held on May 21 through a virtual competition.  This follows their win as the highest scoring team in California during the state competition in April.

Team members, who participated in the county and state competitions, include:

The United States Academic Pentathlon is a five-event scholastic competition for middle school students, providing the benefits of Academic Decathlon along with the challenges of rigorous team and individual competition.  This year our Academic Pentathlon group consisted of 19 seventh graders and 7 eighth graders. The team met twice a week from December to April learning about this year’s theme: The Cold War. Students read the book Spies: The Secret Showdown between America and Russia by Marc Favreau, they listened to music from the 1960s-1990s, learned about the major political figures during the Cold War, and much more.

The pentathlon areas of concentration are language and literature, fine arts, science, mathematics and social science. Academic pentathlon teams comprise students in three different grade-point average categories: Honor (those with GPAs of 3.80 or above), Scholastic (GPAs of 3.20 to 3.79) and Varsity (GPAs or 3.199 or below). The categories are designed to ensure all students have an opportunity to compete.

You can find the full list of team and individual honors at https://usad.org/Pentathlon/Pentathlon-Results.aspx.

Congratulations to our Lakeside Pentathletes!