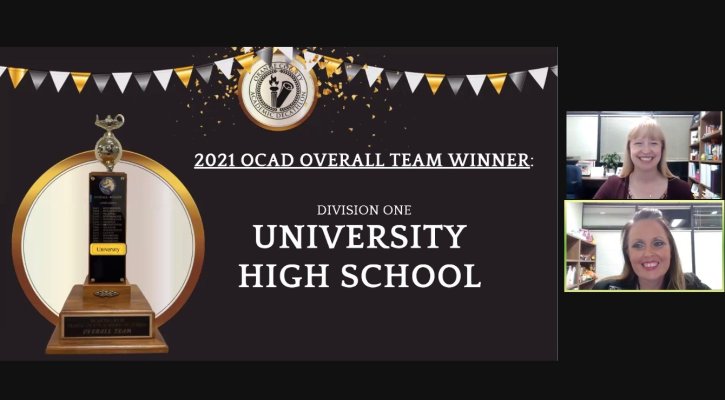 “The students and I are completely overjoyed,” said University High Coach Chris Esposito.  “We have never won the county championship before, so this is huge for our school’s history.”

Esposito, who teaches Spanish and has coached the Uni Academic Decathlon team for eight years,  credited his students with mastering the concept of teamwork.

“They knew that all nine needed to perform well, and they supported each other well,” he said. “They not only learned so much about the Cold War but also about the  power of a group effort.”

Mike Nakaue, retired Woodbridge High teacher and Academic Decathlon Head Coach said, "This team continued to show improvement, even with the unique circumstances and they should be proud of their efforts."

About 350 students from 32 schools participated in this year’s Orange County Academic Decathlon over three consecutive Saturdays from Jan. 23 through Feb. 6. All of the events were adapted to an online format except the rapid-fire Super Quiz Relay, which didn’t quite translate.

Joining the University and Woodbridge squads at the California Academic Decathlon in March will be Valencia, Garden Grove, Westminster, Beckman, Trabuco Hills, Esperanza and San Juan Hills high schools. The National Finals will follow in April.

“We are thrilled to have nine teams invited to the state decathlon this year,” Orange County Department of Education Coordinator Kristin Rigby said. “I’m so proud of our students for demonstrating such grit and determination through this challenging time, and it was particularly fun to see some new schools invited, including Beckman, Garden Grove, Esperanza and San Juan Hills.”

Here’s a breakdown of the top Division 1 Orange County teams and their overall scores.

The Academic Decathlon was originally conceived by former Orange County Superintendent of Schools Dr. Robert Peterson, who envisioned “a decathlon of studies” while serving as a prisoner of war during World War II. The first contest took place at Bolsa Grande High School in 1968.

These days, decathlons are staged at the county, state and national levels, with nine-member teams competing on objective tests, speeches, interviews and essay assignments. The rules dictate that each team must have three “Honor” students (those with GPAs of 3.80 and above), along with three “Scholastic” students (GPAs of 3.20 to 3.79) and a trio of “Varsity” students (GPAs of 3.199 and below).