During the November 15, 2022 Board of Education Meeting, the Irvine Unified School District community collectively thanked retiring Board Members Sharon Wallin and Ira Glasky for their years of service, dedication and for their role in helping to establish IUSD as one of California’s highest-achieving school districts. 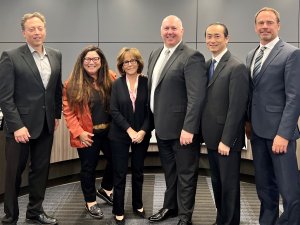 In collaboration with Board of Education Members, they were not only responsible for overseeing IUSD’s more than $500 million budget, but they also helped the District navigate through the COVID-19 pandemic and through unprecedented growth in Irvine, which included opening a new school almost every year since 2013.

“Thank you for your tireless work in support of our students, staff and families,” said Superintendent Terry Walker during the meeting.  “You both embody our core values of integrity, collaboration, learning, empowerment and trustworthiness.  Through your commitment to continuous improvement and your student-centered focus you have made IUSD a special place and have left a lasting legacy.”

Wallin, who completed her fifth term, was the longest-serving member of the elected board. She has become a staple of the board and the IUSD community as a whole.

“I am so proud of IUSD’s accomplishments and our students,” said Wallin, who’s lived in Irvine for 45 years. “We have a community that really cares about public education and the education of their child.”

Wallin’s involvement in IUSD began long before she was first appointed to the Board in May 2002.  After serving as an interim Board Member, she was later elected by Irvine residents in November of the same year. 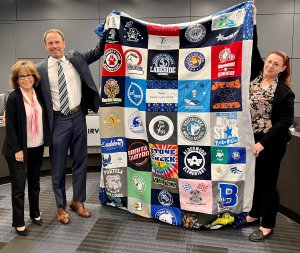 She was the first PTSA president of the then-brand-new South Lake Middle School. She also served on the district-wide PTA executive board.

Wallin was among the Irvine parents who traveled to Sacramento and let legislators know IUSD was not receiving its fair share of funding from the state. Their efforts led to a bill that increased the state’s allocation to IUSD by $300 per student.

As a board member, she pushed the District to hire employees based on attitude, not just qualifications. Wallin says they must come to work joyfully every day no matter what happens and be an intellectual risk-taker who can show students it’s OK to make mistakes. She helped hire four superintendents during her 20 years on the board.

“I’m proud of how we have developed a continuous improvement plan,” she said. “We don’t just take ourselves for granted. It’s not OK to say, ‘We have high scores, so we don’t have to tweak anything.’ We are always improving. Always.”

“I have received much more as a board member than the time and energy I’ve given,” she said. “I’m proud of where we are as a district right now.” 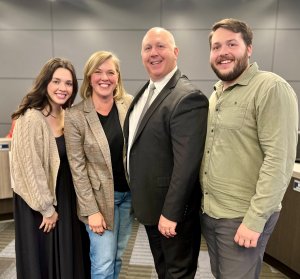 Glasky was appointed to the Board in 2013 to serve the remainder of longtime board member Gavin Huntley-Fenner’s term. He was elected in 2014 to a full term.

“It’s been a great experience,” Glasky said. “We have an amazing district, amazing people who work here. That goes to our teachers, our leadership as well as my colleagues on the board. So I’m really thankful to have been on the Board for nine years.”

Glasky said he’s proud of having overseen the opening of nine schools and the improvements to aging school facilities through Measure E.

“From the facilities standpoint, we have improved the educational experience for every student in the district,” Glasky said.

IUSD was one of the first districts to bring back students on campus for in-person learning during the pandemic, while continuing to offer remote learning options.

Before joining the Board, Glasky served as an appointee to the District’s Finance Committee and has been actively involved at the site level through PTA/PTSA, School Site Council and athletic boosters. 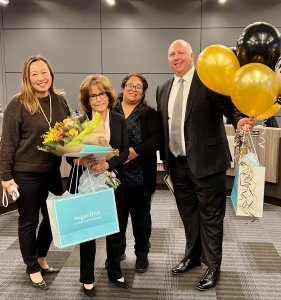 Newly elected Board Members Jeff Kim (trustee area 4) and Katie McEwen (trustee area 2) will be sworn in at the next Board Meeting on December 13.