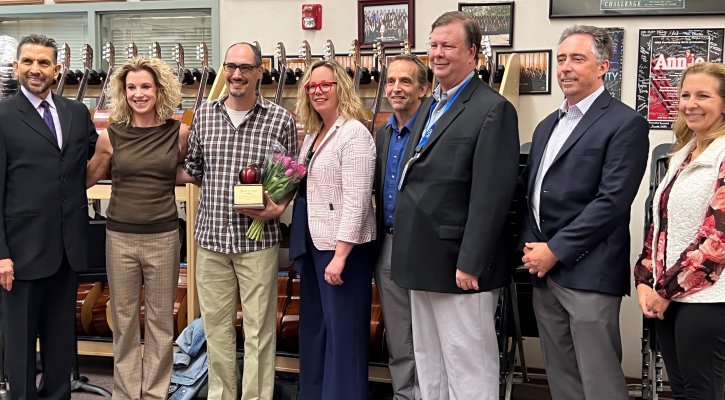 Northwood High School’s Ben Case was named one of six Orange County Teacher of the Year finalists by the Orange County Department of Education (OCDE).

He has helped grow Northwood High’s instrumental musical program, which is now one of the largest in the state.  The school boasts nearly 800 students in the band and orchestra program, including more than 120 musicians in one of Northwood’s four Jazz Ensembles.  Such high levels of participation is virtually unheard of in high school.

“Ben’s passion for music results in full classes year after year, and draws students to Northwood High School to be a part of his program,” said Van Patten.  “The energy and communication he brings to the stage as a conductor leave no doubt as to why our high school musicians want and love to be involved in his program.”

For the last 15 years, Mr. Case has organized IUSD’s Band Spectacular, an exciting mega concert in which marching bands from all five comprehensive high schools join forces to demonstrate the power and spectacle of performative art.

“Ben cares so much about his students,” said Roach.  “He takes the time to get to know each and every one of his students, which is why he gets the best out of them.”

All six of this year’s Orange County Teachers of the Year received a special award from Dr. Mijares, and a tote bag with prizes from SchoolsFirst Federal Credit Union, the program’s premier sponsor.

In the fall, the finalists will be formally honored at a dinner gala at the Disneyland Hotel, where they will receive cash awards from the Orange County Teacher of the Year Award Foundation, established by the William, Jeff and Jennifer Gross Family Foundation.

This year’s winners were selected from a field of more than 60 educators countywide, who were honored in their home districts. The process included both applications and interviews for the 15 semifinalists.

To read more about the six OC Teacher of the Year Finalists and to see a live video of Case’s in-class surprise, visit the OCDE Newsroom by clicking here.