The Arts are a Critical Part of IUSD's Culture

Since the IUSD’s inception, the District has been committed to developing well-rounded students, with the understanding that arts education is a crucial component to student successes both academically and personally. 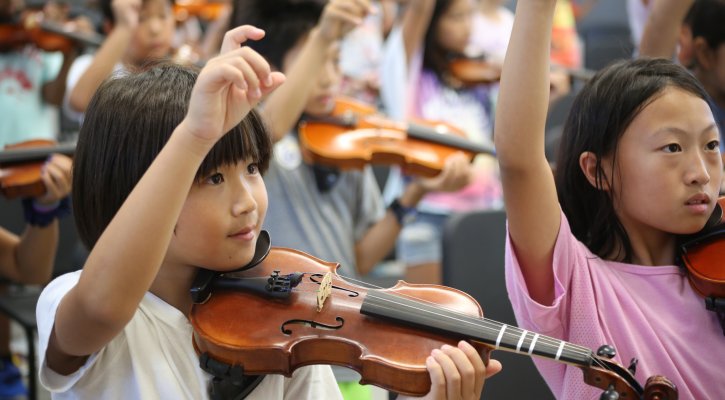 Over the last several decades, school districts across America have been cutting time and money spent on arts education.

Since the Irvine Unified School District’s inception, the District has been committed to developing well-rounded students, with the understanding that arts education is a crucial component to student successes both academically and personally.

As part of this commitment, IUSD has provided students with opportunities to pursue their passions in the arts over the past half-century, while remaining one of California's highest achieving school districts.  This commitment has also been enhanced through partnerships such as the Irvine Company’s Excellence in Education Enrichment Fund.

"Once school districts start cutting arts programs, they have a hard time bringing them back," said Brad Van Patten, IUSD director of arts education. "Despite being one of the lowest-funded school districts in the nation, the arts have flourished for each child in IUSD schools under the Board of Education's visionary leadership and the belief that the arts play an essential role in children's education." 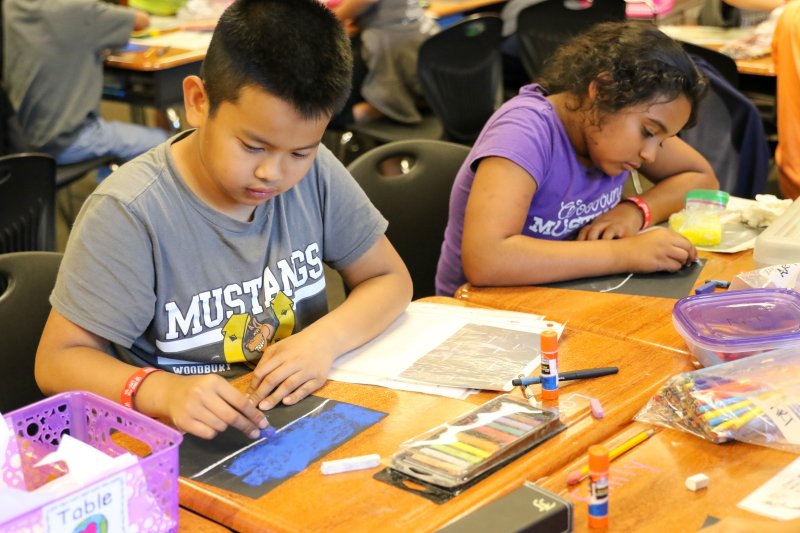 After the 2008 recession, IUSD leaders chose to defer some maintenance projects so that schools could continue to offer arts education.

More recently, as part of Measure E improvements, the District has been building new art facilities, such as the performing arts complex at Woodbridge High, featuring a 650-seat theater. (Measure E is a bond measure voters passed in 2016 with a maximum available bond issuance of $319 million to upgrade IUSD's oldest schools to help provide educational equity for all students across the District.)

Studies have shown that arts education has substantial benefits for children.

Through a randomized controlled trial of 10,548 students in Houston, researchers found that those who learned arts in school were less likely to be disciplined, had more compassion for others and saw improvements in writing. They were also more engaged in school activities and more likely to want to go to college.

Research also shows that arts education supports skills, such as learning to analyze and solve problems, communication and collaboration, and can enhance reading, speech and cognition. The arts also foster a sense of community and belonging, supporting students’ social and emotional wellness.

The arts teach students skills that are necessary to succeed in challenging careers, where workers are required to think outside the box, Van Patten says. These skills include problem solving, creativity, self-discipline, teamwork, leadership and the ability to perform under pressure. 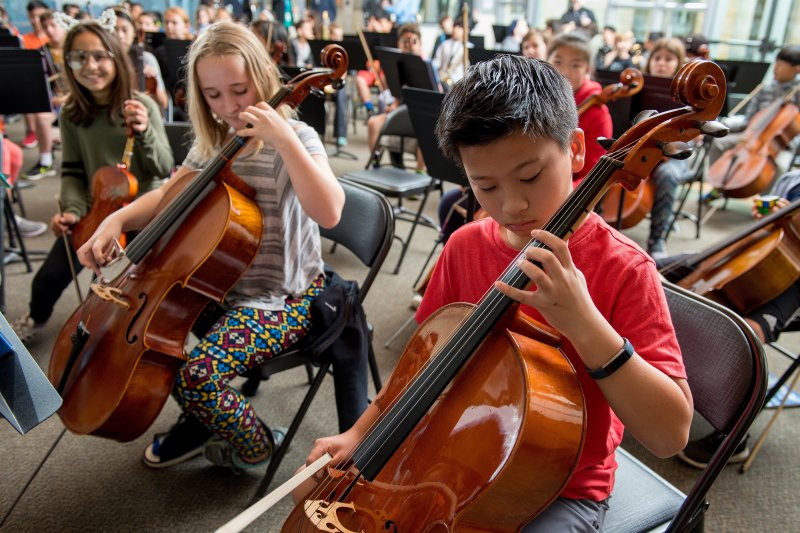 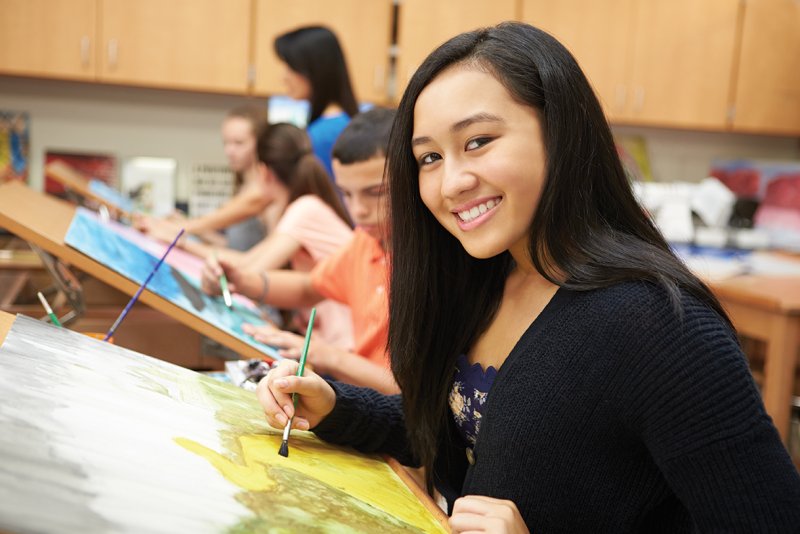 Franklin Kao, a former IUSD student, who graduated in 2005, immersed himself in music growing up in Irvine. He worked at Fox Sports, where he helped produce World Series and Champions League shows. He now manages video content for Turner Sports, editing footage for NBA shows.

He credits his success to the well-rounded education he received at IUSD schools.

"There were a lot of opportunities to engage in diverse activities in Irvine," like participating in musicals, that prepared him to get to where he is, Franklin said. "They taught me to think outside the box and not be afraid to try different things. In my current job, you've got to have a broader perspective to offer than doing one thing all the time."

He said music developed his abilities to talk to and collaborate with people and gave him a way to express himself.

"It would be really crushing if arts and music and all of that went away and if everything was just focused on purely academics and test scores and standardized testing."

A Sense of Community

Northwood High senior Mei Ono participates in nearly all music programs offered at the school. She plays the violin in the orchestra and piano in the jazz band and sings in the choir. She is a drum major in the marching band of nearly 300 members.

She never had trouble making friends growing up because there was always someone she knew through music. She already had dozens of new friends before going into her first year at Northwood because she had participated in the summer marching band camp.

"People say that the marching band is like a family, and it's so true," Ono said. "I found so many of my closest friends through the marching band and other music programs. In group settings like that, you all want to achieve the best possible music together, and that's what makes them special. You have a community of people you can rely on."

The arts are inclusive, allowing students from all walks of life to come together, says Ben Case, an instrumental music director at Northwood High.

"There are countless examples," Case said. "Some kids struggling in school because of the language barrier may find an area they can thrive in the arts. I know our theater teacher has talked about kids that are English learners who have done amazing pantomime projects in her class."

Due to state funding formulas, IUSD receives less per student than nearly every district in California. Thus, the District needs to be creative about using its limited resources to provide quality arts education, Van Patten said. For instance, instead of using expensive outside vendors, the District has hired a specialist to repair musical instruments. 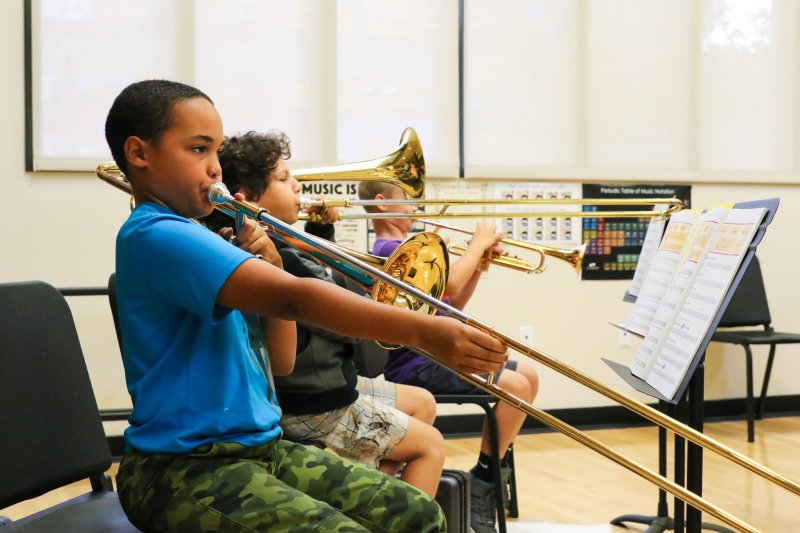 The District has also formed key partnerships within the community to further support arts education programing.

The Irvine Company's Excellence in Education Enrichment Fund epitomizes such partnerships. The company has committed $45 million over 20 years to augment the Districts programming by supporting funding for art, music and science specialist teachers for every fourth through sixth grader in IUSD.  Students receive six one-hour art lessons from highly-qualified art teachers, and create original works of art, while also receiving two 40-minute music lessons per week from outstanding and talented music instructors.

As a result, elementary school students in Irvine spend more than 30 percent more time on arts education than other school districts.

Ono discovered her love for the violin in fourth grade at Santiago Hills Elementary, where music specialist teacher Diana Grey introduced her to the instrument. Without Grey's class, Ono said she would never have played the violin.

Because many IUSD students have played music since elementary school, they can play professional- or college-level pieces when they get to high school, Case says.

"One thing that sets IUSD apart is having a corporate partner invested in education for such a long time," Van Patten said. It's more than just money they've given us. They let us use Irvine Company facilities to exhibit student artworks. We truly are partners."

Another partner is the Irvine Public Schools Foundation, which helps to set the stage for student success through their commitment to primary music education. In addition to IPSF’s music rental program, which offers parents a less expensive alternative to purchasing a new instrument that may only be used for a short time, the foundation also supports music education beginning in kindergarten through third grade.

Looking to the future

With such a strong culture of support for arts education from the IUSD Board of Education, administrators, staff, students, families and community partners, it is no surprise that IUSD has been named one of the nation's Best Communities for Music Education by the NAMM Foundation for 10 consecutive years. IUSD joins only 4 percent of school districts nationwide to receive this honor. 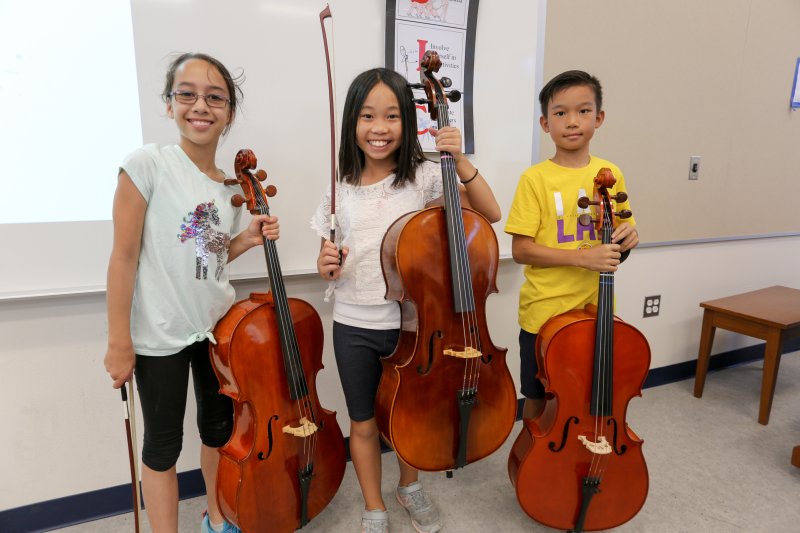 More than half the 6-12 grade students in the Pacific Symphony's youth ensembles come from IUSD. The rest come from all over Southern California.

What does the future look like for arts education in IUSD?  The District is committed to continually improving teaching and learning, while utilizing available resources, partnerships and supports to build upon its successes and to continue its commitment to robust arts education for all IUSD students.

Van Patten says technology will play an even more significant role in the future of arts education.

IUSD now offers digital media, graphic design and other multimedia courses. It became one of the first districts to integrate Adobe Creative Cloud into its curriculum.

Music students at IUSD have a subscription to Soundtrap — an online recording studio that lets them compose, record and collaborate in real-time through chat and video calls.

"Think about all the music you hear in movies and TV shows now," Van Patten says. "It's all done on a digital audio workstation. This is the 21st-century instrument. This is what Bach and Mozart would use if they had it."

During the pandemic, high school students used Soundtrap to create and perform original songs together — without convening in person. Some expressed messages of hope to address current social issues.

Funding for the arts is a key to help students develop original ideas and broader thinking, Kao said.

"There's something about understanding those subjects that will help you in any career path you end up taking," he said. "I feel fortunate growing up in Irvine, having all these opportunities when I was young."

To learn more about arts education in IUSD, visit iusd.org/ArtsIUSD.