The GRAMMY Foundation announced, Friday, November 13 that the Irvine Unified School District’s four comprehensive high schools have been named 2016 GRAMMY Signature School Semifinalists, making IUSD the district with the most schools to receive this prestigious national designation.  Irvine, Northwood, University and Woodbridge high schools are among 119 schools nationwide selected as semifinalists and will move forward in this process, which culminates in March 2016 with the announcement of the finalist schools. 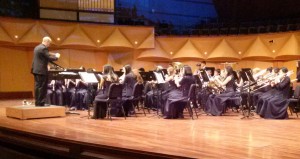 “This is a very important and prestigious honor for our students, staff and community,” said Brad Van Patten, Coordinator of Visual and Performing Arts.  “It is a testament to the entire K-12 program that allows for a quality music education with access and equity for every child in IUSD to help develop their individual talents in a collaborative ensemble that will be a part of their college and career skillset.” IUSD’s four comprehensive high schools have won 11 GRAMMY awards, with half of those going to Northwood High School.  Earlier this year, Northwood High School music teacher Ben Case was selected as a semifinalist for the Music Educator Award, also presented by the GRAMMY Foundation. Established in 1988, the GRAMMY Foundation promotes the impact of recorded music on American culture and recognizes schools that provide exceptional music opportunities for students. Each year, more than 20,000 public high schools have an opportunity to apply to become GRAMMY Signature Schools, but only a small number earn the honor. In March 2016, an independent committee of top music educators and professionals, will decide which schools merit the finalist designation.  Selected schools will receive grant money ranging between $1,000 and $6,000 to benefit their music program.
+FEATURED
General
High Schools
Honors
Visual and Performing Arts