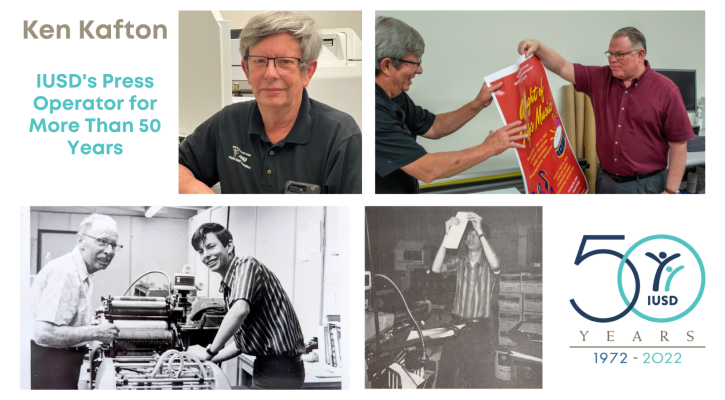 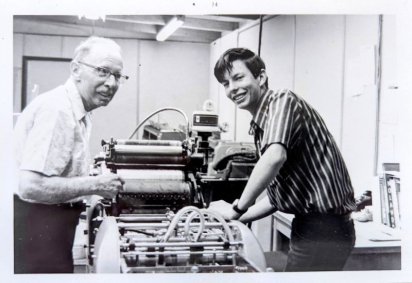 His next-door neighbor, Lin Trestrail (pictured to the right), ran the shop in a nondescript building off Sand Canyon Avenue near the I-5 and needed someone to help him out a few hours a day. A year later, Kafton was hired as a full-time Multilith operator.

He ran the small offset press, printed administrative and learning materials, and bound books for the district.

“It’s an ever-changing type of deal,” Kafton said. “Every day is a bit different, and the challenge of learning how to do things and helping students and teachers is rewarding.”

The print shop became part of the Irvine Unified School District in 1972 when the San Joaquin School District split into three districts – Tustin, Irvine and Saddleback Valley school districts.   Kafton has worked at the print shop ever since. He’s the only employee who’s been with IUSD for the entirety of its history, witnessing its growth and evolution.

In the early 1970s, much of Irvine was still farmland and orange groves, including where the current IUSD’s headquarters stands, Kafton said. Residents had to drive to Costa Mesa and Santa Ana to do major shopping.

“It was such a small district at the beginning,” he said. “The teachers and staff, we were a close-knit family basically because of the size. All the administrators, teachers and classified staff would get together every year — a big luncheon for the whole staff. At that time, they could rent a large restaurant and fit everybody. Now it’s impossible to do something like that because it’s so much bigger. I never thought Irvine would grow quite this much.”

Still, many of the qualities that make IUSD one of the highest achieving school districts have existed from its inception, Kafton says.

“From the very beginning, everyone was driven to do their best,” he said. “People weren’t focused on being No. 1 in the state or anything like that. Their focus was and has been to do their best to help out the students and the community.”

In the mid-1970s, IUSD became one of the first school districts in the nation to adopt a then state-of-the-art technology that would allow video conferencing. This was a time before personal computers and the internet, not to mention smartphones and social media.

One time, Kafton recalls, the district invited members of a World War II squadron as guest speakers and broadcast the feed live to all school sites. Students then asked questions standing in front of a video camera from their respective campuses.

“The District was good at coming up with ideas and implementing new technologies,” Kafton said. “That was exciting for most of the employees at the District. The administration was open to new ideas. They didn’t want to stay in a cookie-cutter type formula. If you had an idea that helps kids learn and expand their knowledge, they were open to suggestions.”

Such open-mindedness still runs through the District today, Kafton says.

“The District has always been big on decentralization,” he said. “For us, we’ve run the print shop more like a commercial print shop than any other district in OC. We don’t tell schools what they should do; they tell us what to do. It sometimes makes our job more difficult, but it definitely helps our students.

“It helps you keep focused on why you are here and what your job really is.”

Also, from the beginning, the city of Irvine and its master developer Irvine Company have been supportive of the District, Kafton says. IUSD administrators met with representatives from the city and Irvine Company monthly to share their needs and goals.

“There was a lot of communication going on,” Kafton said. “It was kind of a team effort with everybody.”

No Plans to Retire

After relocating a couple of times, IUSD’s print shop in 2007 moved back into the same building where Kafton launched his career.

Kafton, 69, is now the lead press operator of the three-person print shop. Many of the posters, brochures, forms and classroom materials used in IUSD come from his office.

Kafton hasn’t set a date for his retirement. He maintains the same drive he had for his job more than half a century ago.

“I love the challenge of trying to solve the problems that come up,” Kafton said. “You are always trying to do things better and meet the needs of the people in the district. At this time, I enjoy the challenge, so I’m just continuing on.”