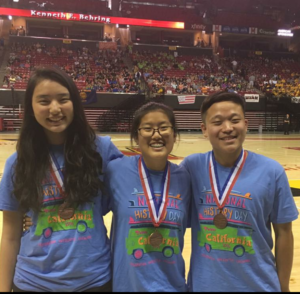 This month, National History Day winners were announced during the 42nd annual Kenneth E. Behring National History Day Contest. Woodbridge High School students Eunji Son, Chai Won (Bella) An, and Kenny Chung, placed third in the senior group exhibit, titled, “Perry Expedition: Exchange through Encounter of Japan.” More than 600,000 students from around the world competed in five categories: documentaries, exhibits, papers, performances and websites. Less than 1% of those entries were awarded the opportunity to compete in the national finals at the Kenneth E. Behring National History Day Contest held in Maryland.  Competitors represented the top entries from 57 affiliate members, including every state, Washington, D.C., American Samoa, Guam, South Korea, South Asia, China and Central America. Nearly 3,000 middle and high school students presented their work related to the 2016 theme, Exploration, Encounter, Exchange in History. “The competitors at this contest are some of the brightest students of their generation,” said National History Day Executive Director Dr. Cathy Gorn. “The work they produce is astounding in its breadth and scope of historical research. Once again, they amazed myself, the NHD staff, and the judges with their hard-work and creative projects. I want to congratulate them all for being in the top 1% of History Day projects created this year and especially congratulate those whose work was deemed the best of the best.” During the Orange County National History Day competition, in the junior level, 15 projects out of a possible 18 projects were IUSD projects and advanced to the state competition. IUSD middle school students swept the website, documentary and historical paper categories in both the individual and group entries. IUSD high school students also had an impressive finish at the County competition, with 18 out of 27 projects continuing to the state level, with IUSD sweeps of the documentary and historical paper categories for both the individual and group entries. While at the state competition, IUSD students were recognized in three award categories: Honorable Mention, Runners-up and Champion. Honorable mention winners included a Junior documentary “Perry’s Voyage: Opening the Gates of the Rising Sun” and group exhibit “The Kennedy-Nixon Debate: How Television Changed Politics Forever” from Sierra Vista Middle School and a senior historical paper from University High School “Star of the North: Catherine the Great’s Exchanges with Western Europe and Russian Encounters with the Enlightenment.” Runners-up included a junior website from Jeffrey Trail Middle School “The Beatles: Revolution on Abbey Road” and a Senior individual documentary from University High School “The Okie from Muskogee.” Four IUSD champions at both the Junior and Senior levels advanced to the national competition. 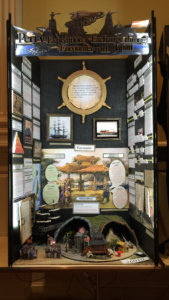 From Lakeside Middle School a historical paper “Unlikely Explorers: The Mormon Battalion;” from Sierra Vista Middle School a group documentary “Nothing Ventured, Nothing Gained: Jonas Salk’s Pioneering Exploration into Poliomyelitis;” from Northwood High School a group documentary “Charles Lindbergh: Exploring Through Aviation, Exchanging Controversial Ideas, Encountering Hostile Criticism;” and from Woodbridge High School a group exhibit “Perry Expedition: Exchange Through Encounter in Japan.” IUSD extends its congratulations to all of our students who participated in the county, state and national competitions and to the many dedicated teachers who worked tirelessly with the students.  To read about Sierra Vista Middle School teacher Jon Miller, who was named top middle school history teacher of the year, click here. Founded in 1974 at Case Western Reserve University in Cleveland, Ohio, the National History Day Contest was created to inspire students to conduct original historical research. Since its creation, the contest has grown to an international competition with more than 600,000 participants that awards thousands of dollars in scholarships and prizes annually. The theme for 2017 is Taking a Stand in History.
+FEATURED
General
High Schools
Honors
IUSD in the News
Middle Schools
Uncategorized