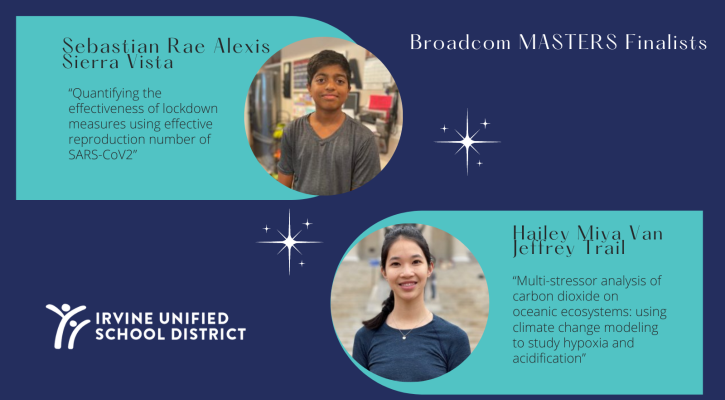 Two IUSD students were recently named some of the most promising middle school STEM students in the country.  Sebastian Rae Alexis from Sierra Vista Middle School and Hailey Miya Van from Jeffrey Trail Middle School have been recognized as two of the top 30 finalists to compete in Broadcom MASTERS.

Billed as the nation’s premier science, technology, engineering and mathematics — or STEM — competition, Broadcom MASTERS seeks to inspire young scientists, engineers and innovators who will solve complex challenges of the future.

Sebastian and Hailey were selected from more than 1,800 entrants, who come from 28 schools and 15 states across the nation. Along with taking home a $500 cash prize, they will compete for more than $100,000 in experiential awards and prizes during a virtual competition scheduled to take place from Oct. 22 through Oct. 28.

Here’s a bit more information on each of the finalist’s projects (project summaries courtesy of the Broadcom Foundation and Society for Science).

Project background: California’s COVID-19 safety measures called for a lockdown, but sparked protests by those who argued that they were not effective and were pointless. Sebastian, often called Sebe, decided to search for scientific evidence to see if the county lockdown was working. After doing research, he stumbled upon a mathematical model using an effective reproduction number. Its starting point measures the initial rate of virus spread in the population and then changes as time passes and the virus does or does not reproduce.

Project background: Hailey is interested in the marine environment, specifically aquatic chemistry and how human processes have led to unnatural, potentially deadly conditions in the ocean ecosystem. In particular, she was intrigued by hypoxia, a dangerous low oxygen condition. To try to predict future hypoxia levels, Hailey studied global climate models, which can simulate large, complex processes in the ocean, atmosphere and land. She believes that society should prepare for the eventual impacts of climate change, while also doing everything possible to reduce them.

Additional information about each of the finalists and their projects can be found in the 2021 Broadcom MASTERS finalist program.