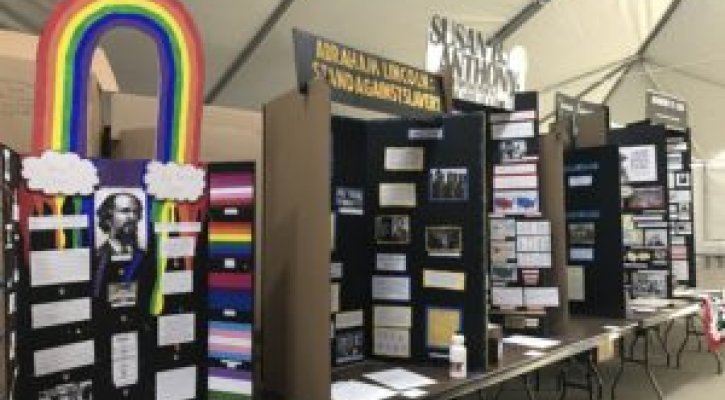 Every year, about half a million students in grades four through 12 take part in National History Day

events across the U.S. These young historians produce original websites, papers, documentaries, performances and exhibits, which are showcased at the local, county, state and national levels.  The theme this year is “Taking a Stand in History.”  The Orange County National History Day competition took place on March 11 at the Orange County Department of Education offices.

IUSD had a tremendous showing with 170 students submitting 108 projects. Topics ranged from “Taking a Stand Against McCarthy: The Power of Modern Day Journalism,” to “A Voyage to Freedom: The Korean Independence,” to “William Wilberforce: Stand Against The Slave Trade.”

Students moving on to the State National History Day Competition in May are listed below.  All five IUSD high schools and four middle schools are sending projects to the state level.  Congratulations to all students who participated!

Irvine High School
All Action and Results, and Not Just Talk, Talk, Talk: John Lewis, a Lifetime of Taking a Stand for Civil Rights
Christine Park

Individual Performance
Jeffrey Trail Middle School
Gandhi: A Man Who Inspired Others To Take A Stand With Him To Free India From The British By Only Nonviolence
Lavanya Gupta