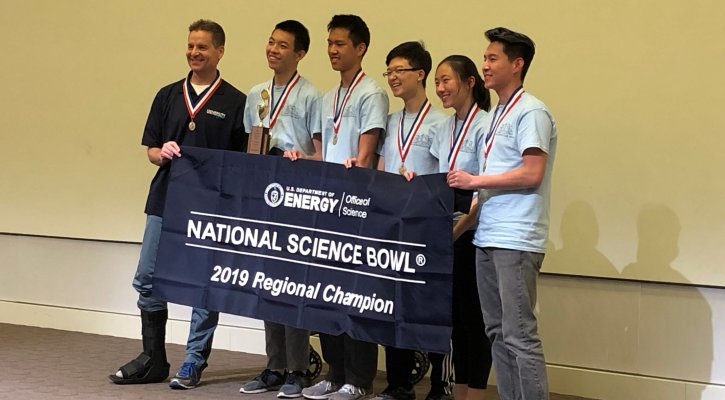 For the second straight year, University High School took top honors at the U.S. Department of Energy’s National Science Bowl on Jan. 26.  The Jeopardy-style competition was held at NASA’s Jet Propulsion Laboratory in Pasadena and tested students’ knowledge of science.

Seniors Michael Diao, Anton Ni, Maggie Zhang and Jerry Li and junior Nyle Wong were undefeated as they competed against 24 teams from the Southern California region.

“I was incredibly happy for the team and proud of what they have accomplished,” said David Knight, Science Bowl coach and science department chair at University High. “Each team member has worked so hard and they have been even more motivated since winning last year.”

As part of the competition, Science Bowl teams are asked questions about math, physics, Earth, space, chemistry, biology and energy during 16-minute long rounds. They were not allowed to use calculators, books, notes or the internet.  In other words, students must know the answers and be prepared to hit the buzzer first.

University High will advance to the national tournament in Washington D.C. this April.