Six campuses in IUSD have earned the state's highest level of recognition for public schools. Eastshore, Stone Creek, Stonegate, Turtle Rock and Westpark elementary schools, as well as the K-8 Vista Verde School, were among 424 sites announced as California Distinguished Schools Wednesday by Superintendent Tom Torlakson. Nearly 60 earned the distinction in the county, according to the Orange County Register.

“We could not be more proud of the students, staff and parents at these six campuses, which exemplify our mission to provide the highest quality educational experience we can envision," said Sharon Wallin, president of the IUSD Board of Education. "To have a single California Distinguished School in your district is cause for celebration. To have six in one year is phenomenal.” Now in it’s 29th year, the California Distinguished Schools program has continued to evolve, focusing more recently on the ability of public schools to provide an equitable and rigorous education. It also recognizes sites that have made significant progress in narrowing the academic achievement gap. Those that were eligible to apply for the honor -- based in large part on their accountability scores -- were required to submit written applications that included comprehensive descriptions of two signature practices, which were later validated through a county-led review process. "I applaud these strong, thriving schools that are making such impressive strides in preparing their students for continued success," State Superintendent Torlakson said. "This award is well-deserved by these school communities for their enduring dedication to high standards, hard work, and unwavering support." All of this year's California Distinguished Schools will be honored in early June during regional award ceremonies. They have also agreed to share their signature practices with other schools that would like to replicate their work. For those scoring at home, IUSD campuses have now earned Distinguished School honors 61 times since the program began in 1986. Here's the complete list: 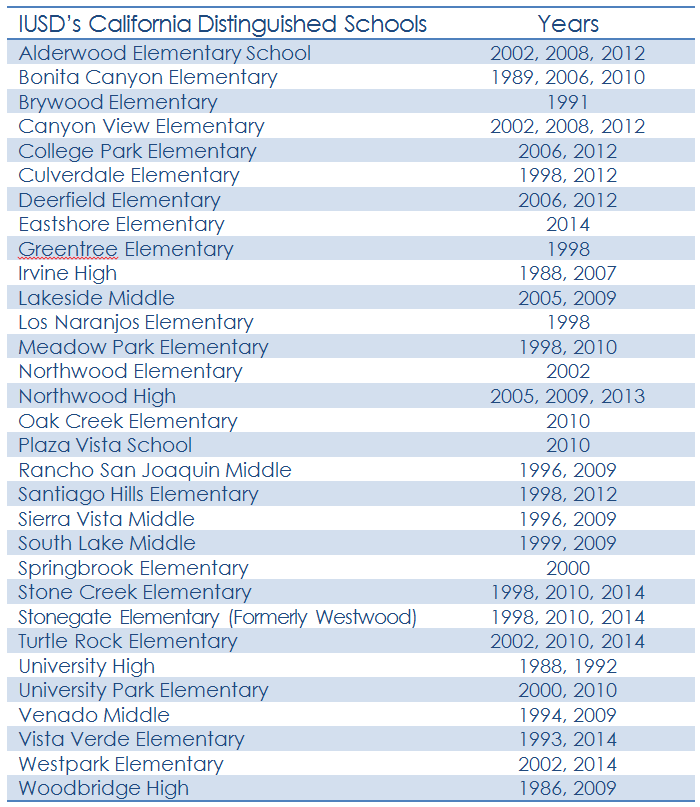