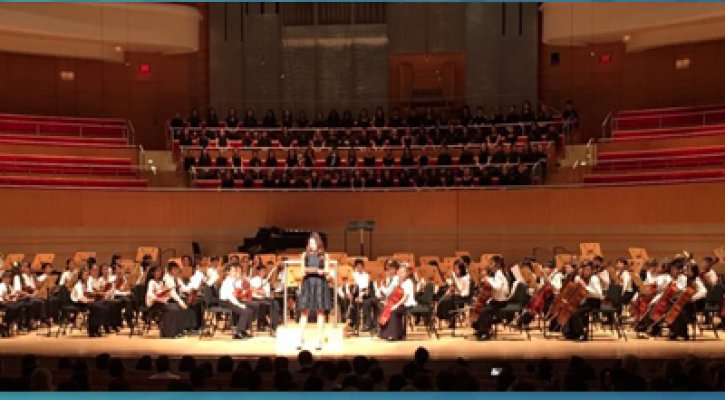 Approximately 625 top IUSD vocalists and instrumentalists in grades five through 12 participated in the musical showcase. This annual event is presented by the Irvine Public Schools Foundation, in partnership with IUSD.

“The Bren Honors Concert has become an important IUSD tradition and has given our exceptionally talented students the opportunity to showcase their music and vocals in a world-class venue,” said Brad Van Patten, IUSD’s coordinator of Visual and Performing Arts. “This year, the concert concluded with a special finale featuring 340 student vocalist in the high school honor orchestra having the honor to perform Peter Boyer’s “On Music’s Wings” with the composer also conducting. Students ended the night by receiving a standing ovation.”

The concert is named in recognition of the generosity of philanthropist Donald Bren. Under his leadership, the Donald Bren Foundation and the Irvine Company have provided more than $200 million to support education, including more than $45 million to preserve art, music and science programs in IUSD.
In addition to serving as an incredible performance opportunity for students, the Donald Bren Honors Concert also generates funds to support music education.  “The Donald Bren Honors Concert represents an outstanding effort by donors, parents, music instructors, students and members of the community to provide, preserve and expand outstanding music programs for kids in our schools,” said IPSF President and CEO Neda Eaton.