During Stan Corey’s 14-year tenure, the District’s first superintendent established a foundation that has resulted in IUSD becoming one of California’s most successful school districts.  Five decades later, his vision still lives on. 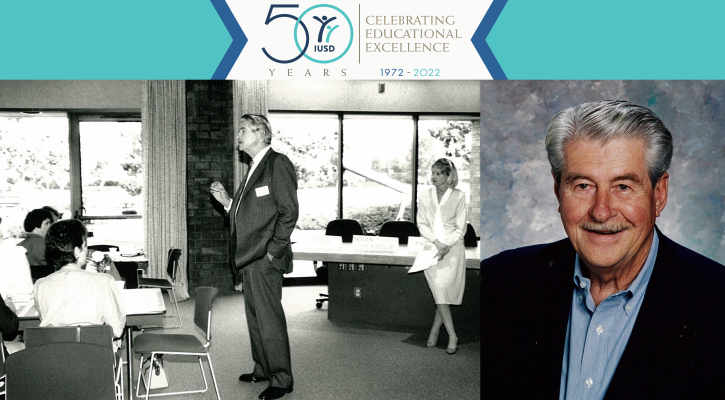 When A. Stanley Corey first arrived at the town center at UC Irvine, there was a card table and folding chair waiting for him in a hallway. It was his office — at least for the time being.

There, he began drawing up his vision of Irvine Unified School District (IUSD) with a pencil on a yellow notepad.

“It was the chance of a lifetime,” recalled Corey, the first superintendent of IUSD. “Start with a blank slate and build a district. It was very exciting.”

When the brand new district Board of Education hired Corey in 1972, it had just two conditions for him. He’d have two years to create a “superior” district, and if he succeeded, they’d continue to follow his lead.

“We were committed to being the best, and that was not just ego,” Corey said. “That was in response to the community. They desperately wanted their own school district, which they could be involved and in control of and that was made very clear.”

Corey and the board kept their promise. Corey established the foundation of one of California’s most successful school districts during his 14-year tenure. He died in 2014, but his vision still lives on at IUSD — similar to how Steve Jobs left his mark on Apple.

“Before he passed away, we had a lot of opportunities to touch base and talk to him,” IUSD Superintendent Terry Walker said. “I shared my ideas on how I felt the District should be run and asked him for his thoughts. He told me, ‘That’s absolutely what we had in mind!’ It felt very affirming because he’s such a legendary figure in IUSD’s history.”

Corey executed his vision with a set of 37 founding principles, most of which wouldn’t seem out of place at a Silicon Valley tech firm. (Indeed, Corey had served as the superintendent of the Berryessa and Cupertino union school districts in Silicon Valley before he came to Irvine.)

One of the first things Corey did, as the superintendent, was to attract the best teachers.

His strategy? Decentralization. In other words, let teachers be themselves so they can excel and grow.

The District allowed schools to create their own programs and plans to meet the needs of their respective communities.  Each school was accountable to its families.

The idea of empowered accountability continues to guide IUSD, enabling principals and teachers to bring out their creativity and full potential. It allows them to make the best decisions for their students.

IUSD schools survey and regularly engage with their community to assess priorities, needs and interests.  For example, Woodbridge High surveys its teachers, students and families every year. After receiving requests for the school to offer computer science courses, the Woodbridge High team acted quickly. The school found a teacher and launched one of the most extensive computer science programs in Orange County in 2014.

“What decentralization or empowered accountability allows us to do is to take guiding principles and values, make a change and create a school that works for our students and families.” Woodbridge Principal Chris Krebs said. “The level of autonomy at the school site and classroom is far beyond anything I’ve experienced before I joined IUSD.”

Aaron Jetzer still remembers the day when he was hired as principal at Culverdale Elementary School. Superintendent Walker and Assistant Superintendent Cassie Parham simply told him to do what was best for his school, and they’d offer him whatever help he needed. Many districts say they do the same, but few follow through on the promise, Jetzer says.

“They gave me the autonomy to do what’s best for my community from day one, and I was allowed to challenge and question the status quo,” said Jetzer, who later became the founding principal at Eastwood Elementary. “I really appreciate that the district trusts me for what I do for the community.”

Jetzer also makes sure he provides autonomy to his teachers the way the District does for him.

“You hire the right people and trust that they will do the right thing,” he said. “I can’t overstate how important that is.”

Walker, Krebs, Jetzer and other administrators and teachers are fully aware such empowered accountability comes with increased responsibility.

This includes IUSD’s Continuous Improvement Efforts, which illustrate the District’s core mission to develop essential capacities within our students and staff and to evaluate the impact of our teaching on student learning.  One example of this is the District’s Professional Learning Communities (PLCs), where teachers work in groups to assess their effectiveness by looking at evidence of student learning and give feedback to one another.  Through PLCs, teachers work to meet the needs of every student in their classrooms, to help ensure they are learning at the highest levels possible.  This may include supports for students who have not yet mastered the standards or enrichment supports for students who have surpassed the standards, to working with students who are at grade level.

“We have extraordinary expectations, and we follow up and make sure things are working as they are supposed to,” Walker said. “We let the person who sweeps the floor choose their broom, but also give them options and resources to choose the best possible broom.”

“Organizations must strive for momentum, not stability.”

“Outrageous expectations should be standard.”

“Institutions must be dynamic and changing if they are to survive in a radically changing world.”

“Somewhere in the District, we have the talent to lead us in the solution of any particular problem.”

And of course, this one: “Students must be the focus of all efforts.”

Corey’s successors have made sure these principles evolved with the times, such as creating the aforementioned Professional Learning Communities. The District is now 10 times larger and much more diverse than 50 years ago. Technologies like the iPhone, iPad and social media didn’t exist back then.

“Stan Corey’s vision still lives on, but our current leaders are making sure it still works in today’s environment,” Walker said. “We always ask ourselves, ‘How do you get better?’ We are making sure his vision and values are continually improving and adjusting to the times.”

The notion of empowered accountability has been a central value at IUSD during its 50-year history. Here are some ways the district’s teachers are making the most of this concept to continually improve teaching and learning. 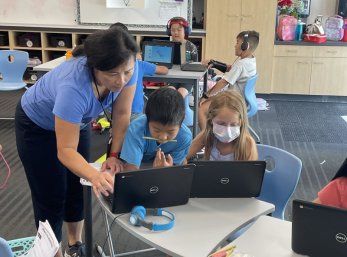 First-grade teacher, Jo-Ann Welche was trying to find a way to make her class more engaging for English learners. Because she knew the use of visuals raised their interest level and helped their understanding, she turned to technology.

Welche went to her supervisor and asked if her students could get their own District Google accounts. This was before the District had begun its one-to-one program (where each student has access to a Chromebook). Still, she received a quick yes and encouragement to try her ideas.

Her students used Google Drawings to tell their stories. She also let them create stop-motion movies.

“They are going to be more engaged and motivated to learn to read and write,” Welche said. “At the heart of it is, ‘What’s best for the kids?’ But you are not going to know it unless you try. It’s great that we have the flexibility to meet the needs of our students.” 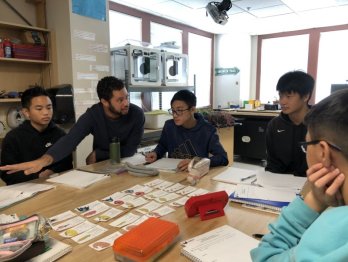 Shawn Gillespie, a science teacher, said the District’s empowered accountability allows him to choose a topic that piques the interest of his students.

“I try to choose something local and what kids are interested in,” Gillespie said. “As long as I’m following the state guidelines, I can choose any topic, like great shark encounters.”

Gillespie said educational reform doesn’t happen in a top-down system. He said it requires each teacher’s willingness to do something better for students and make changes.

“We don’t ever want to stop moving forward,” Gillespie said. “Intellectual risk taking is at the center of IUSD. It doesn’t penalize you for failure. When we do, they help us and say, ‘Hey, why don’t you try this?’ We do things as a team. We have teachers who are doing extraordinary things. We have teachers within our ranks to help us move forward.” 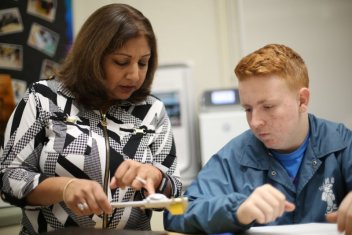 However, Archana Jain, mathematics and engineering teacher, who worked in the aerospace industry before becoming a teacher, didn’t want to lose students who discovered their passion for engineering after their first year.

She decided to structure her pathway program differently so that students could join at different stages. All she had to do was explain her reasoning to her supervisor, and she got the green light.

“Some districts are strict about doing things in order,” Archana said. “I strongly feel that this wouldn’t have been possible in another school district. I would hate to lose a kid who suddenly wakes up and wants to do engineering.”

Such autonomy helps get the most out of teachers, Archana says, especially in STEM (science, technology, engineering and math), where many instructors have industry work experience. They can tailor their courses based on their expertise, such as aerospace engineering in Archana’s case. She also emphasizes writing and presentation skills in her classes, because she understands their importance for engineers.

“I really like the ability to decide what students need to spend time on as long as they are not losing time on learning,” Archana said. “That’s my focus.”