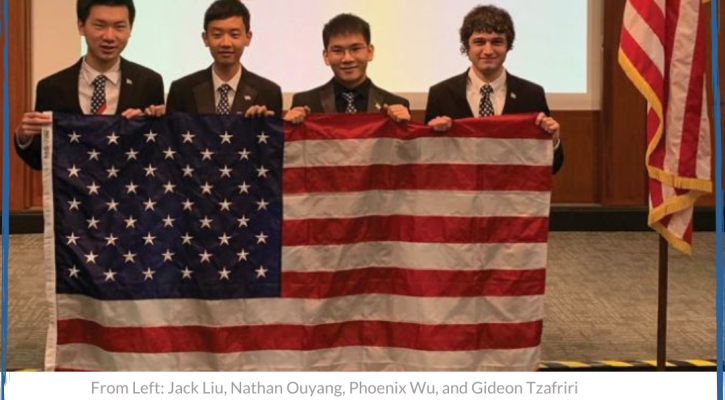 University High School student Nathan Ouyang (second from left) was one of four students from across the nation to represent the United States in the International Chemistry Olympiad (IChO).  Nathan placed sixth overall, earning a gold medal, while his teammates Jack Liu from Indiana, Phoenix Wu from Texas, and Gideon Tzafriri from Massachusetts, placed 37th, 60th and 94th respectively, earning silver medals.

More than 300 students from 84 countries took part in this year’s IChO, which is an academic competition for high school students and is one of the International Science Olympiads. Each national team selects up to four students with two alternates.  Although the competition was held virtually, the U.S. team met in Washington, DC, where they took a five-hour theoretical exam that covered nine questions about topics such as rapid COVID-19 detection techniques, carbon dioxide capture and transformation, and lithium-sulfur batteries.

University High student Yufei Chen was also selected to serve as an alternate for the U.S. team, making IUSD the only school district in the nation to have two students participate on the national team.

Congratulations to our U.S. team and to Nathan for his outstanding performance!